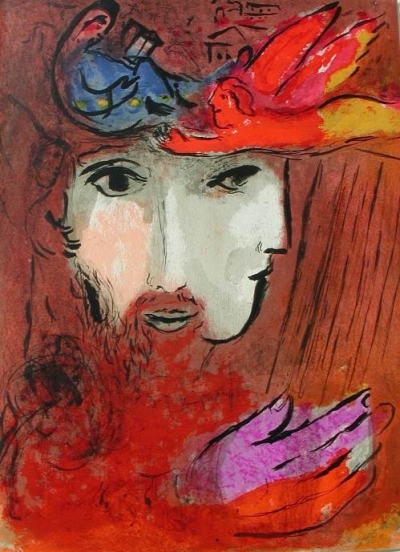 Picture: Marc Chagall. The Uniqueness of the Individual. Two faces and some winged figures intersecting on the head - symbolism: the wide range of human psychological profiles. Men are not the same and were never so. Equality is in blatant contrasts with psychology, therefore men should benefit from equal opportunities in order to develop their uniqueness.

On 10 December 1948, the United Nations General Assembly approved and enacted the Universal Declaration of Human Rights. 48 Countries, including the United States – the actual promoter of the Declaration – took part in the vote and supported this proposal.

After this formal resolution, the United Nations General Assembly instructed the Secretary-General to extensively spread this Declaration and, to this end, to publish, distribute and translate the text not only into the five official languages, but also into as many other languages as possible with every available instrument.

Now, let’s go back to our modern times: over the last seventy years, there has been a rapid and significant progress, however the Declaration of human rights has remained the same.

Seventh principle: one Earth, one Mankind.

Why should there be so many Countries, so many frontiers on maps?

Remember that they are just graphic markings; they exist neither on Earth nor in the sky.

Regardless of the starting point, our goal is to achieve an all-encompassing mankind without any nation or boundary.

The world belongs to us; one mankind, one Earth and we can turn it into paradise.

Currently, we do not need any representation of hell: it surrounds us, it is everywhere.

If we take a close look at the world, we see that men are so miserable that the existence of another hell is unnecessary.

Eighth principle: the uniqueness of mankind.

I would like to focus on a beautiful but often misused word: "equality."

Some scholars believe that all men are equal. Based on their thought, the UN declared that equality is an intrinsic right.

However, nobody notices and stresses that men are not equal, and have never been so.

This idea is in blatant contrast with psychology.

Anyone is unique and irreplaceable.

Equality is a foolish idea. Men are deprived of their individuality: eventually, they end up losing their identity and acting as cogs in the wheel.

I am not going to teach either equality or inequality: I would rather like to stress the idea of Uniqueness.

Every man is unique and its uniqueness must be safeguarded; everybody should enjoy the inalienable right to equal opportunities and the development of their uniqueness.

It is obvious and simple.

Over the last two millenniums, there has been only one Jesus.

Over the last twenty-five centuries, there has been only one Gautama Buddha.

Why should we believe in the equality of men?

Men are unique, and their uniqueness should be promoted and regarded as an independent world.

Nobody is better or worse than the others ... but we are all alone.

And beauty precisely lies in our solitude: you are no longer a crowd or a a mass: you are yourself.

Now, take your time and reflect on this message. The dissertation on the Declaration of Human Rights shall continue at a later time.

Eventually, I would like to reveal the ninth principle: a World Government – and the tenth principle: Meritocracy, since democracy has failed.

Más en esta categoría: « The Right to Know Ourselves – The Right to Freedom A World Government - Declaration of Human Rights »