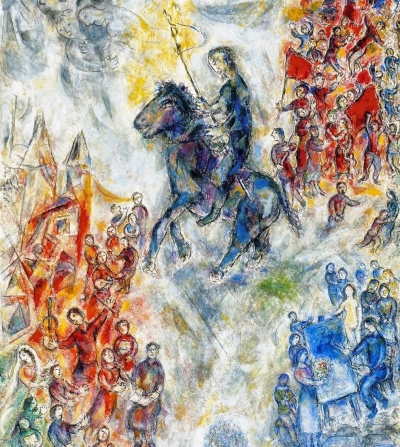 Picture: Marc Chagall. 1974. Symbolism: a knight deprived of his armour standing near a banner and surrounded by peoples in peace. One single government (one head without any power) for all the peoples. This kind of government would result in a wonderful world, whose president or prime minister would have no power, but only tasks, they would be our servants, and not our masters. One single world government would prevent men from gaining power, because the existence of other governments arouses fear and increases the power of the heads of government. If wars ceased, powerful men would be no longer required: power, in fact, results from war. If the military expenses were destined for other uses, war and poverty would disappear.

Now let’s consider the last statements of the “Nobody” prophet, which must not be taken for granted, but examined and discussed, in addition to the popular Declaration of Human Rights.

"Whereas recognition of the inherent dignity and of the equal and inalienable rights of all members of the human family is the foundation of freedom, justice and peace in the world,

Whereas disregard and contempt for human rights have resulted in barbarous acts which have outraged the conscience of mankind, and the advent of a world in which human beings shall enjoy freedom of speech and belief and freedom from fear and want has been proclaimed as the highest aspiration of the common people."

I support a single world government.

In this case, wars would no longer take place and most of the military personnel would be dismissed.

These people would be useful and offer their own contribution if they could cooperate with the other men, and poverty would disappear.

Nowadays, seventy percent of the national domestic product of all the Countries is intended for the army, while the population makes do with the remaining thirty percent.

If the army disappeared, this seventy percent would revert to all the citizens.

These mendicants, these Ethiopias are the result of our society.

On the one hand, we create powerful armies and on the other hand we starve thousands of people.

And we teach men how to kill their fellows.

There are no humanity and civilization when, even today, seventy per cent of our resources is used to kill other men.

One single world government would imply a dramatic change, a true revolution. The whole  Earth would benefit from this new situation.

Moreover, one single world government would be exclusively "functional" and would work within a different context.

For example, the CEO of the postal service performs his/her tasks but has no power, as he/she does not need it.

What are the powers of the CEO of the railway company?

What are the powers of an airline manager?

They just fulfil their tasks.

One single government would be automatically functional.

Nowadays, no government can play this role, since the existence of other governments arouses fears among the population and urges it to increase the power of the relating leaders and grant them a greater support.

If there were no more wars, powerful men would be no more required, since power results from war.

As long as wars take place, power will never disappear, because they are mutually linked.

A "functional" world government would be efficient but deprived of any power, just like airlines as well as post and railway services.

Our world would be beautiful, we would ignore the name of our president or prime minister, since they would be our servants.

Conversely, now they are our masters and, in order to preserve their power, they create fear: Pakistan is going to go to war with India, therefore the Indian leaders need the maximum power.

In his autobiography, Adolf Hitler thus wrote: "If you want to preserve your power, spread fear among the people."

He is right; sometimes even crazy people may be right!

Más en esta categoría: « The Right to a Single Earth - The Right to the Uniqueness of the Individuals The Meritocracy - The Failure of Democracy »