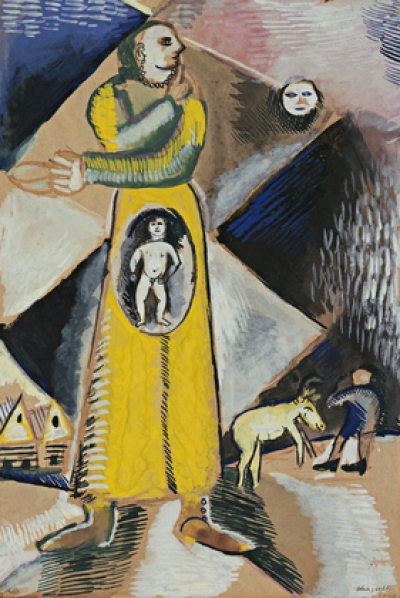 The Right to Know Ourselves – The Right to Freedom. Self-knowledge is science, it improves the health of the emotional sphere (symbolism: a naked character in an egg inside the womb.) Learn the importance of silence (symbolism: the finger pressed on the mouth), pay attention, become the witness of yourself (symbolism: the staring face on the left), remember that you are not your mind, but something beyond it; the awareness - and not the slavery to work (symbolism: at the bottom left, a man with a donkey) - will help you begin the search for the truth." Meditation and relaxation can be achieved through silence and do not belong to any religion (symbolism: the character wearing the typical cassock of priests, but without any particular reference, represents a spirituality falling outside any belief.) Picture: Marc Chagall (1912).

Before completing our Declaration of Human Rights, I would like to stress that men need to start a great thought revolution against the injustices, but especially against the so-called "philanthropists"; i.e. those who declare their love for humanity, their intention to improve the fate of men with the purpose of contributing to the wellbeing of mankind, but inevitably end up establishing fake profit-making bodies and organizations.

All over the world, including Italy, women and immigrants are paid less than men performing the same tasks, although the Declaration of Human Rights states that salaries should be equal, regardless of the workers’ gender, nationality or ethnic group.

In summary, according to our Declaration of Human Rights: the first thing is Life, then Love, Death and eventually the Pursuit of Truth...

And this is the fifth right within the Pursuit of truth: every educational environment, from nursery schools to kindergartens and universities must lay the foundations for an atmosphere suitable for meditation and relaxation.

Meditation and relaxation do not belong to any religion or belief.

It is a form of science, which improves the health of our emotional sphere.

Learn the importance of silence and attention, become the witness of yourself and be aware that you are not your mind, but something beyond it. This awareness - and not just a slavery to work – will precisely lead us to the search for truth.

However, people tend to waste and spend almost one third of their life on schools, institutes, and universities without a proper knowledge of silence and especially of themselves.

They know everything about the world, and yet, strangely, have forgotten to focus on themselves.

We meet other people and know them, but we have forgotten ourselves.

Meditation and self-knowledge are the only way to start counting from ourselves: "One!"

The first thing that we must do is to ask who we are, where we are.

Then, our whole existence shall begin to flow in the right direction.

Sixth principle: Freedom from different points of view, in any dimension.

Unlike birds and other animals, we are not free.

Birds, in fact, need no passport: they can fly to America at any time, without any entry visa.

Only men are surrounded by boundaries and frontiers. Isn’t it strange?

Nations are wide places, therefore we often forget that they are prisons.

Freedom in any dimension means that men, regardless of their birth place, belong just to mankind.

Nations and religions should be abolished, because they both lead to slavery, sometimes even in funny forms.

Parents should not instil a specific conception of life in their children: no sectarian theology, philosophy, political orientation or food style should be imposed.

Conversely, intelligence and wit should be encouraged, so that, as soon as children are mature enough, they can start their own search, a search likely to last a lifetime.

Men should be regarded as human beings.

Nowadays men are not free, they believe to be so, for example when they vote: but they are actually expressing an opinion about things already written and decided.

Conversely, we tend to ruin children and deprive them of their freedom: we shape children according to our wishes.

I believe that freedom is priceless, even when a man chooses to play the flute and will never be rich, but will rather live as a homeless beggar.

You may never be the president of a Country, you may be the beggar who plays the flute on the street, however you have not denied your identity, and this is a source of true satisfaction.

This approach can be applied also to love: be free to choose your lover, regardless of age, gender, money ... the only important thing is freedom both in love and in life.